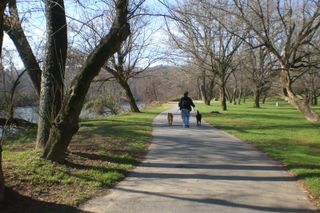 The city of Asheville has some great venues for dog lovers. Two of them, Carrier Park and French Broad River Park, are along Amboy Road, close to each other, and include enough tree-lined paths by the French Broad River to make for a whole morning or afternoon of walking or biking with your four-legged friend.

Carrier Park attracts more of a crowd because of its facilities, but gently rolling paved and bark-mulched paths to the left of the picnic shelter lead away from the busy section, towards French Broad River Park. Walk along the sidewalk to reach the less populated area, and you'll notice a sign indicating the future home of "Karen Cragnolin Park." This is part of the ambitious "Wilma Dykeman Riverway Plan," named for a local writer/conservationist, and sponsored by the visionary organization, RiverLink. The plan calls for the eventual formation of a 17-mile continuous greenway linking the French Broad and Swannanoa Rivers. It's an exciting and bold concept that encourages recreational use of the city's waterways.

French Broad River Park, beyond Carrier Park and to the left off Amboy Road, is a walker's delight. It has the added benefit of a fenced, 1-acre dog park on the premises. (However, there's a newer and larger dog park on the other side of town called the Azalea Road Dog Park, near the WNC Nature Center and not far from the Bleachery Boulevard shopping area.)

Walk or ride along the paths at either Carrier Park or French Broad River Park, stop to look at the water, and take time for you and your dog enjoy what Asheville has to offer.