Dogs at the Movies! 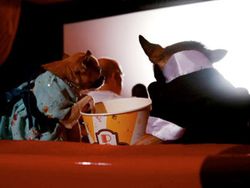 What is thought to be the first movie theater for dogs had its debut last month in Sweden, according to Petside.com. Eight screenings of the movie, Marmaduke, were held in a theater, and 20 dogs attended each show -- but they did have to attend with their owners.

The pups didn't get popcorn and candy, but they did enjoy "goodie bowls" with doggie snacks courtesy of Pedigree, who co-sponsored the theater with Fox Home Entertainment.

The theater was a special one-time occurrence set up in conjunction with a pet exhibition, but the organizers said the doggy theater was so popular that they would do it again next year.

Maybe this is a novel idea for a movie theater in the dog-loving Carolina mountains???

Now that pic deserves tweeting. Although the dogs look like they have run out of popcorn already!