The Travel Pet Mat, made by Crypton, is a go-anywhere sleep surface that easily rolls up into a packable size. It's the perfect portable bed for all of your summer vacation destinations, from hotel rooms to campgrounds. It is made from material that offers complete stain, moisture, mildew, bacteria and odor-resistant protection. The Travel Pet Mat is available in three different patterns and sizes. Prices vary from $65 to $105.

Crypton also makes a "Throver," which is a soft, comfortable stylish blanket-like tarp that protects your sofa or car seat.

For additional information about these and other products for pets, visit: http://www.cryptonfabric.com/pet-beds/cat-dog-beds.do

The stamp art features an original illustration of Owney, with many of his famous tags and medals gleaming in the background.

In the 1880s, during the height of the Railway Mail Service, clerks in the Post Office in Albany, New York, took a liking to a terrier mix named Owney. Fond of riding in postal wagons, Owney followed mailbags onto trains and soon became a good-luck charm to Railway Mail Service employees, who made him their unofficial mascot. Working in the Railway Mail Service was highly dangerous: According to the National Postal Museum, more than 80 mail clerks were killed in train wrecks and more than 2,000 were injured between 1890 and 1900. However, it was said that no train ever met with trouble while Owney was aboard.

As Owney traveled the country, clerks affixed medals and tags to his collar to document his travels. When John Wanamaker, Postmaster General from 1889 to 1893, heard that Owney was overburdened with tags, he gave him a special harness to display them all. During his travels, Owney accumulated more than a thousand medals and tags. Today Owney is on display at the Smithsonian Institution's National Postal Museum in a case that includes some of his medals and tags.

The Owney the Postal Dog stamp is being issued as a Forever stamp. Forever stamps are always equal in value to the current First-Class Mail one-ounce rate. Stamps can be purchased at any post office or online at The Postal Store.

Win a Free Copy of the Asheville Doggie Guide! 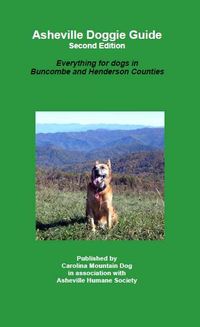 Carolina Mountain Dog is celebrating its second year anniversary -- two years of publishing what to do, where to go, and information for dog lovers who live in or near the Carolina mountains. Not only that, August 26 is National Dog Day!

In honor of our birthday and National Dog Day, we're running a contest and it's easy to win. Simply tell us 3 things you would like to see us cover in the next year. What do you need to know? Where do you want to go? What information would you like to see?

Just submit 3 things you would like to see covered in Carolina Mountain Dog. Submit your entry using the Comments link below this blog post.

One winner will be chosen on the basis of originality. The winner will get a free printed copy of the second edition of the Asheville Doggie Guide. The guide has hundreds of listings for everything for dogs in Buncombe and Henderson Counties, plus a "best of Carolina Mountain Dog" section. It's a $15 value, yours free if you win!

ExceptionalCanine.com is a website for active dogs and their owners that covers the benefits of the dog lifestyle, with tips on how to care for an energetic pet and attend to its needs. The website is currently sponsoring an "Exceptional Puppy Photo Contest" with a gift basket valued at $600 awarded to 10 exceptional puppies. The basket will include such goodies as Eukanuba food, Kong and Nylabone toys, and more.

To enter, go to http://www.facebook.com/ExceptionalCanine and "Like" the page. Then upload a picture (color .jpg file no larger than 1 MB) of your exceptional puppy (must be 2 years old or younger to be eligible). The more votes your puppy gets, the better your chances of winning. Winners' photogenic pups will also be featured on the Exceptional Canine website and Facebook page.

The contest ends on August 29. Visit http://www.exceptionalcanine.com/home.html for additional information and to see what Exceptional Canine is all about.

Registration is open now for Camp Unleashed, a 4-day weekend retreat for dogs and their owners from September 22 through 25. It will be held at Blue Star Camps in Hendersonville, NC, a 500-acre estate and children's camp.

Here's a description of Camp Unleashed from the organization's website: "Hike through the cool, lush mountains. Discover your dog’s talents at Agility, Dock Diving and Nose Work.   Paint your inner dog at Barks & Crafts.  Learn new tricks with your dog and try out Treibball, the new 'urban herding' activity.  Canoe together in the lake, meet new friends, hear the latest on dog behavior and nutrition, and howl around the evening campfire.  All in a safe, friendly atmosphere with your dog."

Camp Unleashed offers a $25 discount for dogs who have been adopted from shelters or rescue groups. For more information about this unique program and to register, visit: http://campunleashed.com/Asheville.html 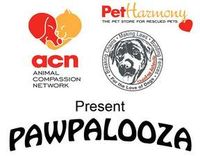 Animal Compassion Network (ACN) and Chain Free Asheville are presenting "Pawpalooza" on Saturday, August 20, from 11 AM to 3 PM at the Pet Harmony, the Pet Store for Rescued Pets, at 803 Fairview Street, Asheville (off Hendersonville Road near the Province 620 restaurant).

According to the Asheville Citizen-Times: "On Monday, County Manager Steve Wyatt recommended the county leave the ordinance as is, and four of five commissioners agreed. A county animal services committee said sales could generate risks or disease and mistreatment, and it could discourage shelter adoptions."

Thanks to all those animal advocates who organized against selling animals at flea markets. Your voice was heard!

If you're looking for a dog-friendly escape that combines both trails and the splendor of a large lake, give Lake James State Park a try. An easy 45 minutes or so east of Asheville on Route 40, Lake James is over 6,500 acres with more than 150 miles of shoreline.

Lake James features boating and swimming, but it is surrounded by a state park that also includes four hiking trails appropriate for leashed walks. Two of the trails extend out to overlooks so you can get a great view of the lake. Sandy Cliff Overlook Trail is just half a mile and Lake Channel Overlook Trail is 1.5 miles. Fox Den Loop Trail is 2.2 miles. All of these trails are considered moderate. Fishing Pier Trail, at .3 mile, is easy.

For directions and a link to a map of the park, visit the Canine Cruisin' page. 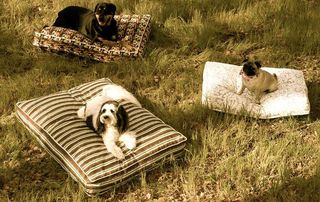 A new start-up that features pet beds has a mission: to promote adoption. Better Buddies, Inc. will not only sell products, the company has also launched "Project Paw," an umbrella for  social programs directed at educating the public on the merits of adoption. Through its first initiative, the Guardian Angel Project, Better Buddies pledges to donate 10 percent of profits to Best Friends Animal Society, one of the nation's leading animal shelters and advocates for "no more homeless pets."

Better Buddies was launched by Julie Marie Berman, an actress who plays 'Lulu' on the television show, General Hopsital, and her husband Mike Grady. The company's focus will be on making products that are well-designed, stylish and of high quality while adhering to "green" ecologically conscious standards. "Our goal," according to the founders,"is to make our products attractive vehicles that help push positive social and environmental change."

Better Buddies currently offers donut beds, pillow beds and bedrolls and will be expanding its product line over time. For more information, visit their website: http://www.betterbuddies.com/ 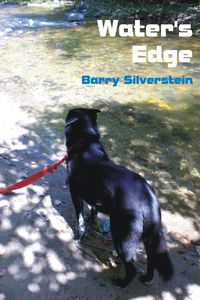 Of course you love dogs -- but if you also love a good story with a dog as the hero, Water's Edge is a new book you might enjoy. An extra bonus: It takes place in Asheville.

Water's Edge features Blackout, a 3-year old female black mixed breed dog -- some lab, some shepherd, and who knows what else. She's jet black with a few white highlights. She was adopted from a shelter by David Samuels, an environmental consultant from Boston, who named her Blackout after a blackout that occurred around the time he adopted her.

David taught Blackout to sniff out chemicals and other substances. She became so good at it that David began to use Blackout as his "secret weapon" in helping to uncover pollutants and even track them to their source. As a result, Blackout became something of a local celebrity.

David has relocated to Asheville to retire, but he gets a strange call from his former employer. Apparently, someone is polluting the French Broad River with benzene. Knowing that Blackout's special skill could help, David reluctantly agrees to get involved.

David and Blackout get caught up in a chain of events that’s more sinister than anyone can imagine. In fact, river pollution is just the beginning of this wild ride. Ultimately, Blackout plays a key role in uncovering the plot -- and David finds out that “retirement” is more than he bargained for!

Water’s Edge is an environmental thriller with plenty of twists and turns. This novel marks the beginning of a new series with two unlikely heroes, Blackout the dog and his baby boomer owner.

Water's Edge is available as an eBook for just $2.99. Get a free sample at the Amazon Kindle store, on the iPad and nook, or at Smashwords.com . You can also follow Blackout the dog's blog.

You're invited to bring your pooch pal for an evening of fido-fantastic fun at Asheville Humane Society's Yappy Hour on Thursday, August 11 from 6 to 8 PM at Pack Square Park in downtown Asheville.

There will be vegetarian appetizers for human consumption and delicious doggie delights for your four-legged friends, including ice cold Doggie Daiquiries. Admission is $10 per person and dogs are FREE.

This is a great way to socialize your dogs and get together with fellow dog lovers, as well as support Asheville Humane Society in caring for the homeless animals of Buncombe County. Pedigree, the pet food company, has come up with a curious and fun gimmick to promote dog adoptions in New Zealand. It's called "Doggelganger." You use a webcam to upload a photo of your face and this "human to canine pairing software" finds a dog that matches you!

It's really just a promotional tool -- and one has to wonder about its accuracy -- but it sure does make you think there is some magic going on as the system analyzes your facial features and supposedly finds a dog that is your perfect match.

Give it a try at: http://www.doggelganger.co.nz/

Good for a Laugh

Pets Influence Owners' Decisions in Many Aspects of Life 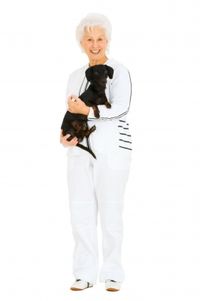 petMD, the world's largest source of pet health information, surveyed 1,500 pet owners in May 2011 and found that pets influence decisions in many aspects of life.

Here are some of the survey results:

Learn more about the survey here.

Actually, it is more than likely just the opposite will occur. People who purchase "bargain priced" animals at a flea market are often doing so on a whim. They are not screened, as they are at an animal shelter, to determine if they will make the commitment of time and money necessary to care for the animal. When the novelty of ownership wears, these buyers will probably bring their animals to a shelter or, worse, dump them on the side of a road.

Smiley's Flea Market, located halfway between Asheville and Hendersonville in Henderson County, is the area's largest flea market. If pets are sold there, both the Henderson County and Buncombe County Animal Shelters could feel the effect by seeing an increase in relinquished animals.

Carolina Mountain Dog urges Henderson County residents in particular to oppose lifting the ban on selling dogs and cats on flea markets. Contact your County Commissioners or voice your opinion at a Commissioner meeting. Public comment is allowed at the beginning of each meeting. Another way to speak up is by writing a letter to the Hendersonville Times-News. Click here for information about submitting a letter.