Real Star of "The Artist" - Uggie! 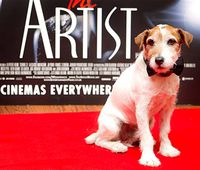 If you watched the Academy Awards ceremony last Sunday, you may have seen a little dog on stage when "The Artist" won Best Picture. It was that dog, Uggie, whom to many was the real star of the movie. (If you haven't yet seen "The Artist," it's worth watching the movie just for Uggie's scenes!)

According to Uggie's trainer/owner, Omar Von Muller, Uggie was a cast-off who became the member of a lot of casts. “A friend of mine called and said there was a family that had a Jack Russell who was really hyper, and they were going to get rid of him,” Von Muller told Vetstreet. “So I took him home and started training him. He was pretty much set to be a star.” Uggie is now a veteran of movies. In addition to his role in "The Artist," the dog has been in "Water for Elephants" and "The Italian Job."

Uggie received the first ever "Golden Collar Award," the doggie version of an Oscar, for his role in "The Artist," but the ten-year old Jack Russell Terrier will be retiring from acting. Uggie has a neurological problem that causes him to shake. Von Muller says doctors indicate he is not in any discomfort, he just isn't well-suited to continuing an acting career.