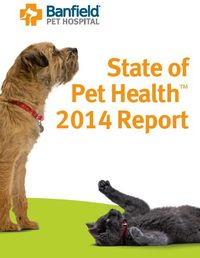 Banfield Pet Hospital is the largest veterinary practice in the world. The organization publishes an annual report, "State of Pet Health," that analyzes data from the over 2 million dogs and almost half a million cats under their care.

Here are some fascinating facts from the 2014 Report:

Check out the complete report here.