Do Dogs Get Jealous? 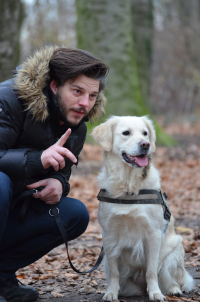 This kind of behavior suggests that dogs really get jealous when they are not the center of attention. But a more important question is whether the jealousy in dogs is the same as the jealousy we humans feel. Let’s find out.

I believed that the jealousy in dogs is no different than it is in humans until I met a sled dog racer in Canada. He was making his Alaskan Malamutes and Siberian Huskies ready for a ride. They all looked cute, and when I maneuvered to pet them the sled dog rider warned me, “You pet one dog and you have to pet them all.” Further, he said, “They get jealous of each other if any one of them gets more of love, affection, food, or anything. They turn into green-eyed monsters.”

This incident made me look deeper into dogs’ jealous behavior.

I am going to discuss two different experiments that helps us understand this behavior better. Friederike Range, of the University of Vienna, did an experiment to study jealousy . Two dogs were given the same task to perform, but one gets rewarded while the other does not. Both the dogs were taught a simple trick of ‘shaking hands’. A dog would extend her paw and put it into the person’s hand.

For the experiment, both the dogs with their respective persons in front of them were seated side by side and were instructed to perform handshakes. But only one dog received the treat as a reward -- the other didn’t. You would think the unrewarded dog would react to this unfair distribution of rewards by performing the same tasks and wouldn’t follow his master’s instructions. This is exactly what happened. The unrewarded dog stopped obeying his master’s command and also showed stress signs when his partner dog kept receiving treats.

Many people would believe that this is not jealousy exactly. It might well be the case that the dog who did not get the treats stopped obeying his master simply due to the fact that all unrewarded training tricks and commands tend to disappear because of the learning process which theorists call “extinction.” Very simply, a dog would not perform the task if he won’t get any rewards in return. Do you also think the same? But wait, you might want to read further.

To ensure that the interaction was important rather than the case of frustration and jealousy, a similar experiment was conducted. But this time it was a little bit different. This time the same task was performed on the two dogs with their respective masters in a separate room. Also, they were not being rewarded at all for obeying their master’s instruction of shaking hands.

Under this circumstance, both the dogs did not only present their paws for a longer time but also didn’t show any signs of frustration or annoyance. So, definitely, the motive to perform the trick was not to get a reward. It was jealousy that the other partner was getting rewards for the same task he was doing.

One More Experiment to Understand This Behavior Further

When human beings are involved in different social settings and situations, every aspect of the reward is closely considered to determine the jealousy. Dogs, however, do not see the situation under the same microscope. This can be understood from a similar experiment to the one previously discussed.

The outcome was surprising. The response from both the dogs was not affected by the unfair share of rewards, unlike what a human might have done if he were in the place of dogs. Dogs are sensitive to fairness (whether they are being rewarded or not), but not to the equity (the quality of rewards).

It can be said that dogs get jealous when they think you have been unfair to them; whether it’s food, love, affection, attention, or anything. Other animals like primates also respond to primary and secondary emotions, but dogs only respond to secondary emotions. If you have any questions or want to share what you feel, please comment. Long may the canines live!

Clara Lou is a co-founder and the marketing head at PetLovesBest. She happens to be an active animal activist in her town who has done a few notable works for the welfare of animals, especially pets. She loves to enjoy writing about pets and animals.

Interesting article. My Labrador always tries to pull me aside when I meet my friends with dogs in the park and pay attention to them, so dogs are really jealous!