7 Tips on Canine Body Language from the ASPCA

This information is provided as a public service from the ASPCA. 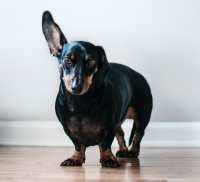 Dogs communicate with one another and with us using their own elegant, non-verbal language. These seven tips focus on seven important aspects of a dog’s body: eyes, ears, mouth, tail, sweat and overall body posture/movement. Staff and volunteers can use this information to interpret what an animal is feeling.

When looking at dog's eyes, pay attention to the white part of the eye (the sclera), and consider the focus and intensity of the dog's gaze. When a dog is feeling tense, his eyes may appear rounder than normal, or they may show a lot of white around the outside (sometimes known as a "whale eye".)

Dilated pupils can also be a sign of fear or arousal—these can make the eyes look "glassy," indicating that a dog is feeling threatened, stressed or frightened.

A relaxed dog will often squint, so that his eyes become almond-shaped with no white showing at all.

A relaxed dog will likely have his mouth open and may be panting, with no facial or mouth tension. The corners of his mouth may be turned upward slightly.

A fearful or tense dog will generally keep his mouth closed, and may pull his lips back at the corners (also known as a "long lip".) He may also be panting rapidly. A panting dog who suddenly closes his mouth in response to something in the environment may also be indicating increased stress. Drooling when no food is present can also be a sign of extreme fear or stress.

A dog displaying a physical warning may wrinkle the top of his muzzle, often next pulling his lips up vertically to display his front teeth. This is called an "offensive pucker." The muzzle is wrinkled and the corner of the mouth is short and forms a C-shape. This warning often comes with a tense forehead, hard eyes. The dog may also growl—all very clear warnings to anyone approaching.

Some dogs display a "submissive grin" or "smile". This is also a gesture where a dog shows his front teeth, but a smiling dog is doing just that. He usually shows a lowered head, wagging tail, flattened ears, a soft body posture, and soft, squinty eyes along with those teeth. Teeth don't always mean aggression—it is important to consider the whole body and the context to understand what a dog is saying.

Yawning and lip licking may be an early sign of stress, particularly when accompanied by a tight mouth and often a whining sound.

Dogs have a wide variety of ear types. Although it may be easier for us to see ear position in dogs with erect ears, even floppy-eared dogs like Basset hounds can move the base of their ears forward and back to show different emotions—just look at the direction of the base of the ear. When a dog is relaxed, his ears may be slightly back or out to the sides. As a dog becomes more aroused, the ears will move forward, pointing toward a subject of interest. When their ears are most forward their foreheads often wrinkle.

When observing a dog's tail, there are two things to consider: the position of the base of the tail, and how the tail is moving.

A relaxed dog holds his tail in a neutral position, extending out from the spine, or maybe below spine level. As the dog becomes more excited or aroused, his tail usually rises above spine level.

A fearful dog will tuck his tail between his rear legs. The tail may also be held rigid against the belly, or wag stiffly.

Much like your own “goosebumps,” the hair can raise along a dog’s back when he is upset or aroused. This is also known as piloerection or “raised hackles” and can occur across the shoulders, down the spine, and above the tail.  Hackles don’t always mean aggression is imminent, but they are an indicator that the dog is excited or upset about something.

A frightened or stressed dog may also shed more than usual.

Dogs pant to cool themselves, but panting can also be a sign of stress, particularly rapid panting accompanied by a tight mouth with stress wrinkles around it.

Dogs also have the ability to sweat through their paws. You may notice a dog leaving wet footprints on the floor if he is particularly upset.

When initiating play, dogs often start with a play bow and generally follow up with exaggerated facial and body movements. A playful dog's body movement will be loose and wiggly, with lots of movement and brief pauses during play.

A dog who seems stiff, moves slowly, or who keeps moving away may not be interested in social interaction with this playful dog.

Looking away, sniffing, scratching, lying down, or other avoidance behaviors may also indicate that the play session is over.

A fearful dog may lean away, lean back, tremble, crouch, lower his body or head, or roll onto his side or back. Often, his eyes will often be fully open with large pupils, his forehead will be wrinkled, and his tail will be lowered or tucked.

An extremely fearful dog may freeze completely or frantically try to escape, and he may urinate or defecate when approached.

A dog displaying aggressive body language will look large, standing with his head raised above his shoulders. His body will be tense, with weight either centered or over all four feet or leaning slightly forward onto the front legs.

A dog displaying aggressive behavior may also have a wrinkled muzzle, a short lip, and a hard eye.

Photo by Erda Estremera on Unsplash