How Accurate are TV and Movie Depictions of Dog Breeds?

As a dog lover, you probably notice that dogs are often shown in TV shows and movies. Not surprisingly, the way dogs are depicted by the media, especially when it comes to their breeds, can affect the perception a TV viewer or moviegoer might have. This leads to stereotypes that may be widely accepted but not always correct.

Directpackages.com, an authorized DirecTV reseller, has created a nifty, informative online guide to dispel common dog breed stereotypes found in TV shows and movies. For each of 15 breeds, the guide compares and contrasts the stereotype with the reality and has some good, specific advice if you choose to adopt any of these breeds. Keep in mind, of course, that a mixed breed dog may exhibit characteristics of a number of different breeds. Also included in the guide are links to trailers for movies in which dogs are featured.

You can find the guide here: http://www.directpackages.com/tv-dog-stereotypes/

The Puppy Bowl is designed to call attention to pet adoption, but it also features some of the cutest puppies you'll ever see competing on "Team Ruff" and "Team Fluff." Puppies are chosen for the Puppy Bowl from shelters and rescue organizations around the U.S. and in Puerto Rico. You can see 40 of the cutest competitors here:
http://www.animalplanet.com/tv-shows/puppy-bowl/photos/puppy-bowl-xiii-starting-lineup/

During the game, dog food brand Pedigree will sponsor a “Puppy Bowl Virtual Reality” experience offering viewers a chance to check out the action on the field through the eyes of Buttons, one of this year's star puppy players.

Also new this year, Pedigree is enlisting Hall of Fame wide receiver Jerry Rice and NFL quarterback Aaron Murray to help spread the word about the Puppy Bowl and show how their own dogs are in training mode. Rice and Murray share their dogs' experiences via their own social media channels.

The Shelter Pet Project is a public service initiative -- a collaborative effort between two leading animal welfare groups, The Humane Society of the United States and Maddie’s Fund, and the leading producer of public service advertising (PSA) campaigns, The Ad Council.

The Project recently launched a new series of ads focusing on shelter pets and their people. Check one of the ads out below.

Posted at 06:00 AM in Animal Causes, Dog Videos, Dogs on Television | Permalink | Comments (0) 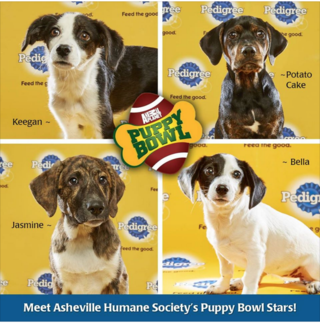 Exciting news!!!!! The Carolina Panthers aren't the only ones headed to the big game! Four puppies from Asheville Humane Society were selected to star in this year's Puppy Bowl XII on Animal Planet!!!

To celebrate, Asheville Humane Society is having an adoption event and Puppy Bowl viewing party at Asheville Pizza & Brewing Co. on Merrimon Avenue this Sunday, February 7 from 2-4 PM with adorable puppies for adoption! Bella, Asheville's very own starting lineup Puppy Bowl celebrity, will be attending at 2 PM to meet and greet her fans!

To watch the Puppy Bowl on the big screen, stick around at Asheville Pizza & Brewing for a viewing party from 3-5 PM. Grab a booth, order some pizza and get ready to cheer on the cutest team to take the field... TEAM RUFF!!!

Posted at 06:00 AM in Adopt-Spay/Neuter, Animal Causes, Dogs on Television | Permalink | Comments (0)

"Feed the Good" Campaign from Pedigree

Pedigree, the world's largest dog food brand, launched a brand campaign earlier this year in Brazil and Australia. Now the brand is taking the campaign global via YouTube.

The first ad to appear is called "The Walk." As you'll see when you watch it (below), the ad has a lofty goal: to demonstrate that dogs bring out the good in people.

What do you think of the campaign? Feel free to comment.

Three puppies from Asheville Humane Society have been selected to be starting players in the nationally televised Animal Planet's Puppy Bowl!

The Puppy Bowl returns for its 11th consecutive year with an all-star, all-adorable cast that's ready to mix it up on the grand gridiron of Animal Planet Stadium. Puppy Bowl XI brings viewers a lovable lineup that's itching to play in a winning combination of terrier tackles, touchdowns, puppy penalties, fumbles and Fido first downs.

This year's big game is sure to be a tail-wagger. From barking beagles and spunky spaniels to everything in between, you'll see the cutest players taking the field on the most action-packed Sunday of the year. Plus, back for another year is the popular BISSELL Kitten Halftime Show, guaranteed to bring the house down! And, sideline reporter "Meep the Bird" will return to tweet live updates throughout the game. Follow @MeepTheBird on game day for the latest news, puppy penalties and behind-the-scenes moments from inside the stadium.

The Puppy Bowl airs before the Super Bowl on Sunday, February 1 from 3-5 pm. Watch as Asheville's own furry celebrities take the field!

This is one of the Budweiser commercials that will appear during Sunday's Super Bowl. It will warm your heart!

The folks at DOGTV think dogs are not only watching television -- they are a unique audience for it. DOGTV claims to be "the first television channel for dogs." Yes, really. This is what the service says on its website:

"DOGTV is a 24/7 digital TV channel with programming scientifically developed to provide the right company for dogs when left alone. Through years of research with some of the world's top pet experts, special content was created to meet specific attributes of a dog's sense of vision and hearing and supports their natural behavior patterns. The result: a confident, happy dog, who's less likely to develop stress, separation anxiety or other related problems."

DOGTV is currently available as a paid service only in San Diego, CA, but the company says it is gearing up for a national launch -- so tell your doggie to keep eyes and ears open, since it may someday be available in our area!

Purina has launched a new ad campaign for its Purina Pro Plan line of dog food. The theme: "Inside every good dog is a great dog." Here is one of the TV commercials -- worth watching just to see the wonderful images of good dogs being great.

The upcoming Super Bowl on Sunday will be a showcase not just for football, but for new ads. Traditionally, advertisers pull out all the stops since they can reach over 100 million viewers at one sitting (at an average cost of about $3.5 million for 30 seconds of air time.)

A number of advertisers have already released their ads. We have it on good authority that animals will be very popular this year, and this pre-released ad about a dog who wants to get in shape from Volkswagen will surely be one of the best -- even though this version has a somewhat strange "Star Wars" ending to it.

The Shelter Pet Project is a national public service awareness campaign designed to dispel myths about shelter pets in order to boost adoptions. The campaign just launched a series of new television ads with the tagline, "A person is the best thing to happen to a shelter pet. Be that person." The campaign is a collaborative effort by The Humane Society of the United States, Maddie's Fund, and the Ad Council.

Here's one of the brand new ads with a few dogs sharing observations about their owners. Take a look!

Posted at 06:00 AM in Adopt-Spay/Neuter, Dog Videos, Dogs on Television | Permalink | Comments (0)

Ever notice that dogs are being increasingly used as the stars of television commercials? Here's an especially cute one that caught our eye -- and you probably haven't seen it since it is only running in the UK. Enjoy!

Bud Light Goes to the Dogs 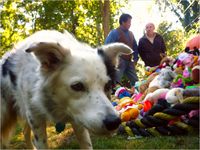 A female border collie named Chaser, owned by Dr. John W. Pilley of Spartanburg, SC, has the largest vocabulary of any known dog -- 1,022 nouns -- according to The New York Times.

Dr. Pilley, a retired psychologist who taught at Wofford College, acquired Chaser in 2004 as a puppy. For four or five hours per day, he showed her an object, said its name up to 40 times, then hid the object and asked Chaser to find it. Chaser learned one or two new items a day and loved every minute of it. "She still demands four to five hours a day," Dr. Pilley told the Times. "I'm 82 and I have to go to bed to get away from her."

The vocabulary relates to physical objects, each of which is given a name the dog can recognize. Dr. Pilley had to buy hundreds of items, writing the name on each item with a permanent marker. Technically, the 1,022 words Chaser knows are all proper nouns. But she also recognizes phrases and can distinguish between "Fetch a Frisbee" or "Fetch a ball." Dr. Pilley even got Chaser to distinguish between three specific actions -- "pawing," "nosing" or "fetching" each object.

Dr. Pilley suspects Chaser could have learned more words, but he grew tired of teaching her when she reached 1,000 items. Now, he says, he is trying to teach Chaser some elementary grammar. "We are interested in teaching Chaser a receptive, rudimentary language," Dr. Pilley said, with the goal of developing methods that will help increase communication between people and dogs.

Chaser will be featured in a Nova episode on animal intelligence which airs on PBS on February 9. For more about Chaser, read the entire New York Times article here.

A current television/online ad for Apple's iPhone is built around a shelter dog. A consumer talks about how she found a dog she fell in love with at a shelter. Of course, it also demonstrates select iPhone applications which relate to the adoption story, including one for Petfinder.

It's a nicely done promotion for the iPhone -- and it reinforces visiting a shelter to get a pet. Kudos to Apple.

This is a commercial that is actually promoting a product from Pedigree called Dentastix -- but it's hard to resist laughing at these dogs with dentures!